They’re Going to Shit on your Head

Those were the last words I heard as I departed to meet my friend to watch the migrating snow geese.

I live with an over stimulated amygdala- my husband. He is constantly scanning the environment for danger of any kind and spends a great deal of time warning me about every possible impending risk. To be fair, it’s because he cares, but it takes a toll.

Let’s recap the role and function of the amygdala. The amygdala, from the Greek word almond, governs our so-called fight-or-flight response. It is our automatic and instantaneous reaction to real or imagined threats. Basically, it’s the fear center of the brain that allows us to respond to dangerous situations reflexively, unconsciously, and immediately.

In many of us, the amygdala is a hair trigger, which would rather be safe than sorry. When your amygdala detects what looks like a threat to your survival, such as a lion charging at you or in my case- leaving the house to watch snow geese, it can activate the fight-flight-freeze mode and impairs rational thinking. It is the impetus of the negativity bias which overestimates the potential risk in an effort to not miss a potentially life-threatening situation.

The good news is you can tame the amygdala. I find it amazing that with attention training, you can regulate something as primitive as the amygdala. The attention training that is most effective is meditation. Think of meditation as mental martial arts. Meditation is a tool that’s long-term effects can help settle the amygdala. How do I know? In addition to countless research studies, I’ve experienced a change in how I react to stress. This week provided more evidence of this. I had an emergency situation with a student on zoom while teaching. Suffice it to say I managed to remain calm and de-escalate the student. I have no doubt it’s a result of my mindfulness practice. Taming our amygdala should be mandatory training for all educators. Actually, for all humans.

So, what can I do about the overactive amygdala that I live with? Not much. I’ve learned to not join the negative side of the street at every warning of impending danger. We are in charge of only our own emotions. We can’t control anyone else, but when we remain calm, we may influence their state, and help alleviate some of the unnecessary apprehension. 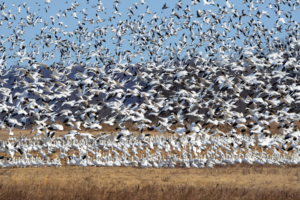 KLEINFELTERSVILLE, PA – MARCH 9: Hundreds, if not a thousand snow geese reposition in the fields of Middle Creek Wildlife RSVR in Kleinfeltersville, PA on March 9, 2013. They are in good company among a thousand tundra swans, a variety of ducks, and the more common canada goose. In February, the migratory snow geese population at Middle Creek reached 55,000 but recently dimished with the recent cold snap. This 5,00 acre -state-owned tract is a 3 hour drive from Washington, DC and a primary breeding ground for waterfowl as well as other wildlife. (Photo by Linda Davidson / The Washington Post)

Oh, and I was able to survive the snow geese migration with an unsoiled head. It was simply beautiful.

Happiness-Marriage and Winston of West Chester