A good friend of mine, Mike, sent me this cartoon. Coincidentally I had just facilitated a workshop where I asked participants to envision what “beings” from another planet would infer about the millions of earthlings who spend money to watch others chase a ball. They might speculate that the “balls” (golf-balls, footballs, tennis balls, soccer balls etc.…) were some type of god to earn such devotion and attention. 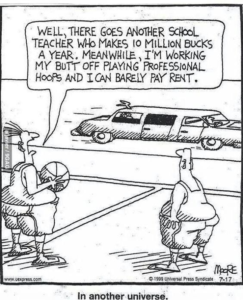 The average salary of an NFL player is $2.1 million.
Seattle Seahawks quarterback Russell Wilson, who is the NFL’s highest-paid player in 2019 at $79 million, sadly had to take a second job to earn $9 million off the field in endorsements.

The average Public-School Teacher salary in the United States is $57,626.
Almost 1/3 of teachers have second jobs. According to Education Week, teachers who work a second job earn an average of $5,100 to supplement their incomes.

Teachers don’t get in this business to get rich, they get in it to make a difference in lives of students. The demands and low pay of the teaching profession can make it hard to stay – even for teachers who are dedicated to the profession. What is it going to take to shift our priorities?

Now I realize its parody, but it does make a point. We teach people how to treat us. If we as educators want to be treated with more respect, the shift needs to begin with us, and in our expectations. Perception is projection.